The previous implementations have been completely replaced with Web Components.  Web components enable the development of widgets such as the new Clibu autosuggest, that are very easy to reuse both within Clibu and in other applications.

Further the design of these new Web components focuses on widgets that work well on Desktop PC’s as well as on Tablets and Smart phones. The expanding Tags component is an example of this.

When not in use it gets out of the way, occupying a minimum of screen space. It does this without sacrificing usability, simply click  on the button and start typing.

The “New Tag” and “New child Tag” dialogs have also changed. The former to make it quicker and easier to select the parent tag using Tag autosuggest instead of having to scroll through the Tags tree. And the later to make it simpler and clearer. 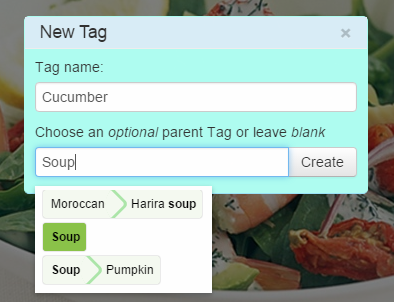 Further enhancements are planned for the “New Tag” dialog to enable you to add a series of tags  in one go.

Future releases will see the new autosuggest web component used in other areas such as the Knowledge Base menu.

Web Components are very new and have a way to go before they are more widely used and fully implemented in all Web Browsers. That said developing these new components has been a breath of fresh air and I’m excited to see how they evolve and plan to focus future development on them.

Web components are inherently self-contained, which leads to their reusability. With that in mind I’m looking forward to releasing the components I’ve written so far as Open Source, so other developers can use them freely in their applications and in time potentially contribute back and further improve upon the work I’ve done.

In the longer term I’d like to see more and more of Clibu released as Open Source and I see this as a win for Clibu, its users and the broader development community.